Despite being down a critical piece of equipment, some quality time was spent enjoying the snow and creating some balance prior to the large snowfall that hit our region. For a few days everything’s been under a few feet of snow making time away easier to cope with. The “Frozen” balance was one that was left overnight. The slightest amount of spray from the creek transformed the balance into a an object fixed in the creek. The other three photos are of a different creation that I took a liking to.  I used a Nikon D50 (circa 2005) to shoot these photos.  The batteries are as old as the camera and have barely enough life to snap a few photos in cold weather.  I even used the cold weather trick of keeping them warm with “shake and bake” hand warmers trying to squeeze out as many images as possible.  Luck and a small amount of skill netted several decent shots with a nostalgic “old school” digital appearance.  Not that they’re worthy of massive enlargement, but they work for social media sharing after the arduous task of removing the hundreds of black dirt specs due to the badly neglected image sensor 🙂 Can’t wait to get a proper camera back in my hands! 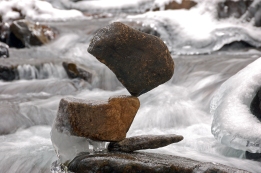 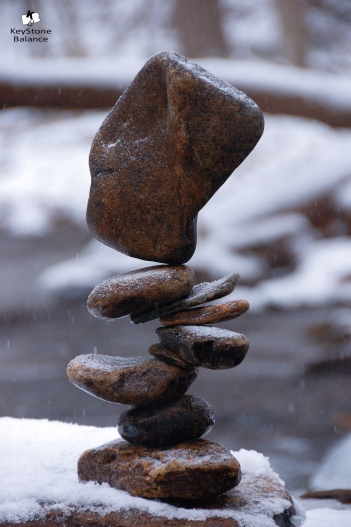